by Jason Preston for Crosscut

“You don’t feel like ‘I’m finished’ but ‘I want to learn more,’” says Zoran Popovic, the Director of the University of Washington Center for Game Science. He is talking, of course, about math. 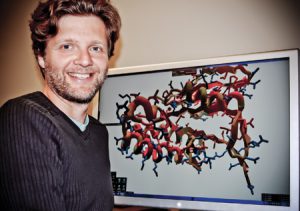 Right now, hundreds of Android tablets are stashed in rollaway closets spread over fourteen sixth grade math classrooms in five Seattle and Federal Way schools. These tablets are running a new kind of educational software dubbed Enlearn, built by a non-profit of the same name that the 46-year-old University of Washington professor founded in December 2012.

This relatively large ten-week trial is a follow-up to a five-day trial they conducted last spring, where teachers presented a short math curriculum twice: once with classic paper materials, and once with Enlearn.    Read more here.