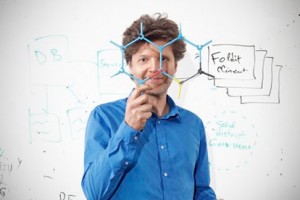 Zoran Popovic, director of the Centre for Game Science at the University of Washington and founder of www.Enlearn.org, is the co-creator of Foldit. Photograph: Michael Clinard

For all their virtual accomplishments, gamers aren’t feted for their real-world usefulness. But that perception might be about to change, thanks to a new wave of games that let players with little or no scientific knowledge tackle some of science’s biggest problems. And gamers are already proving their worth.

In 2011, people playing Foldit, an online puzzle game about protein folding, resolved the structure of an enzyme that causes an Aids-like disease in monkeys. Researchers had been working on the problem for 13 years. The gamers solved it in three weeks.  Read more.